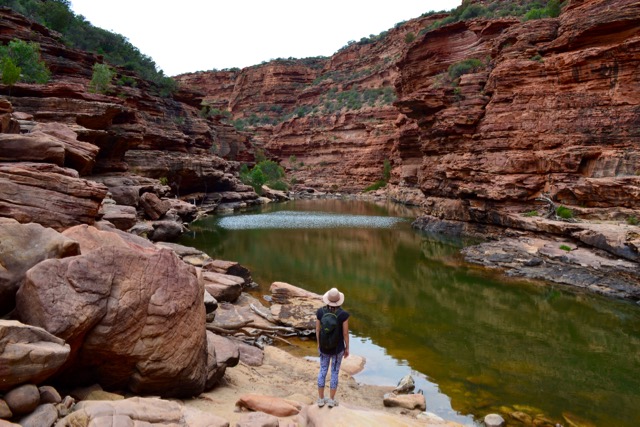 Our time in Kalbarri was some of the best but also the most nerve-wracking of the trip so far. While elated to be back on the road, we were anxious wrecks driving out of Geraldton, terrified that our caravan would fall off or explode or maybe transform into a passionfruit vine and tangle our car wheels up. None of the aforementioned scenarios eventuated and so we made it safely to our destination. 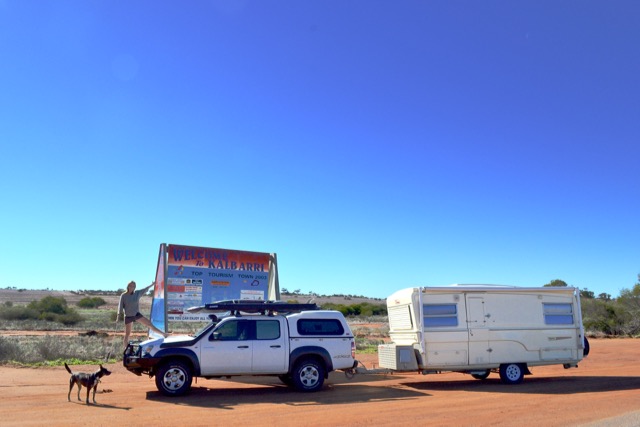 Little Claude, in all his newly-repaired glory, was powered up, full of water and stuffed with food and so we would have liked to start things off with some free-camping. However, while Kalbarri has plenty of tourist attractions on offer, free camps are not one of them. So we took the next best option and checked into Big River Ranch, which is what you get when a horse ranch elopes with a caravan park and they settle down on the mid-coast of Western Australia.

It was a cool little stop with a good vibe and we had fun checking out the horses and donkey as we drove in (Laura now wants a donkey!). The place was empty when we arrived and so we got to choose whichever site we wanted. We ended up in a nice sunny spot with beautiful sunset views over the hills. It was also quite near to the bird coop which housed chickens and two turkeys.

While we’re on the subject of turkeys, we have to ask: has anyone reading this actually seen a live turkey? Laura hadn’t, which firstly gave her pause for reflection on the sad fact that she’s only familiar with the deli cabinet variety of this creature. However, secondly, she found that she could Not.Stop.Laughing at them. Seriously, they’re like something out of a science fiction film.

Our first Kalbarri evening was spent exactly the way we would have planned our post-repairs maiden night back on the road, had we the foresight to organise these things. We spent time checking out the dog-friendly Blue Holes, having a late arvo swim and watching the sun set over the ocean. 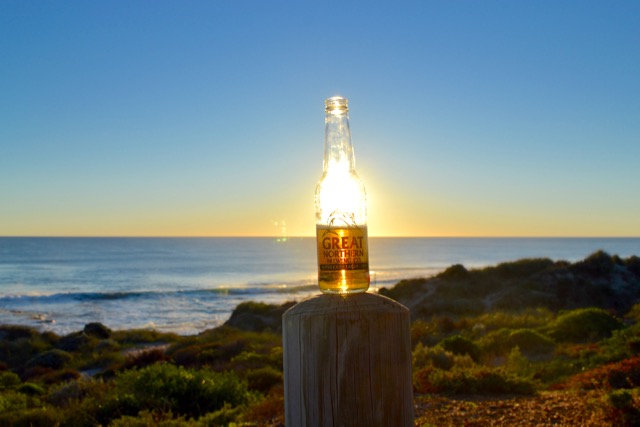 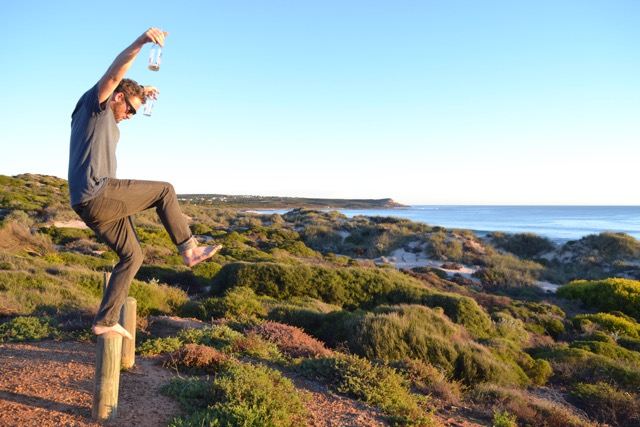 Next morning we started with banana pancakes (Laura’s specialty), some pottering (Laura’s other speciality) and then hit the road to check out the coastal cliffs. They were cool, as evidenced by the following photos. 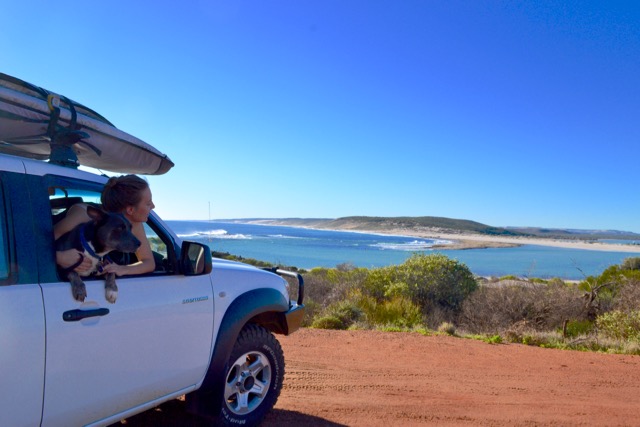 At the start of the Coastal Cliffs drive 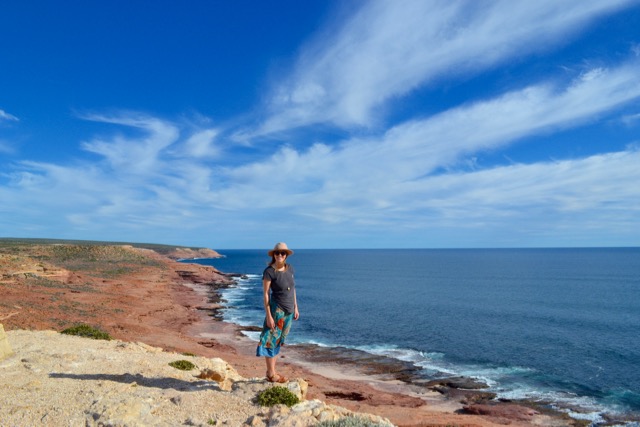 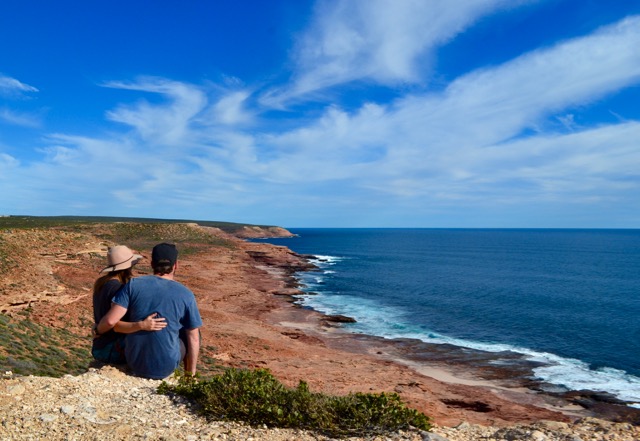 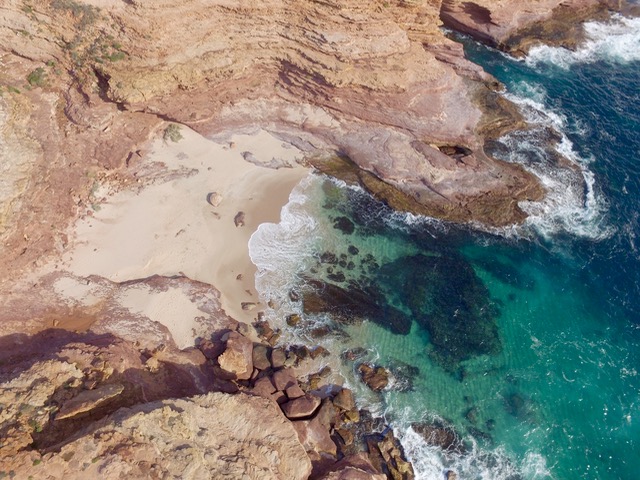 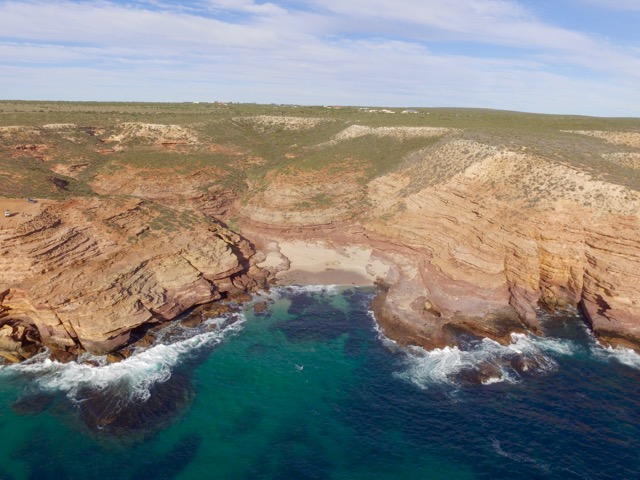 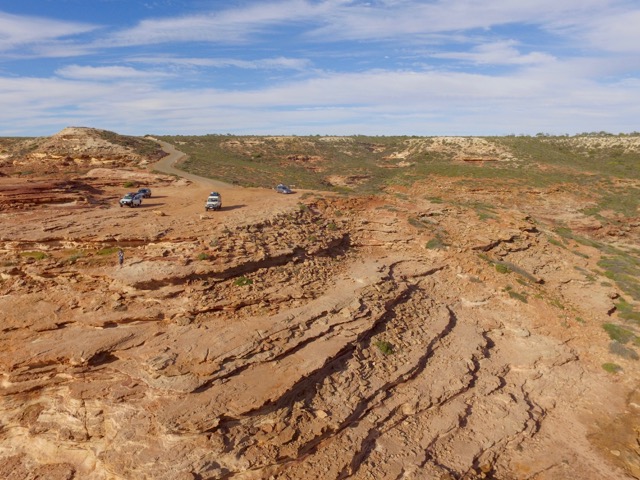 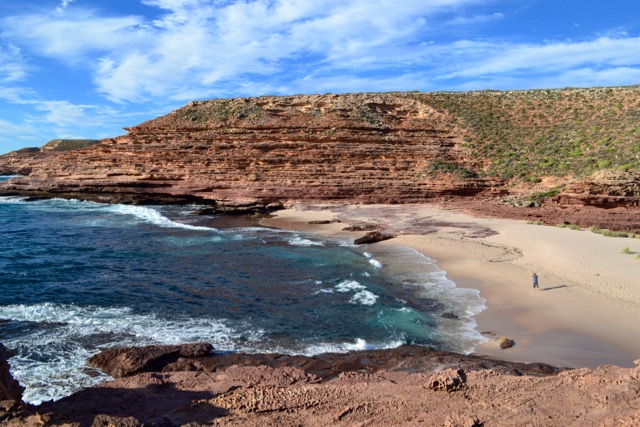 One of the many beaches along the Coastal Cliffs drive

We also tried to line up some dog-sitting for the following day so we could visit the national park. However, were stoked to learn that, unlike every other caravan park we’ve stayed at during the trip, Big River Ranch had no problem with us leaving Neddy at the caravan while we went out. The owners even offered to check on him while we were gone, which we thought was most excellent service.

So, sadly for Neddy, he got left with Claude while we went exploring Kalbarri National Park. 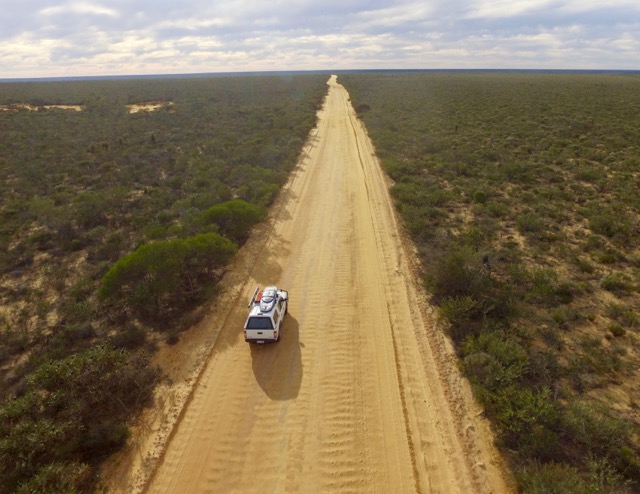 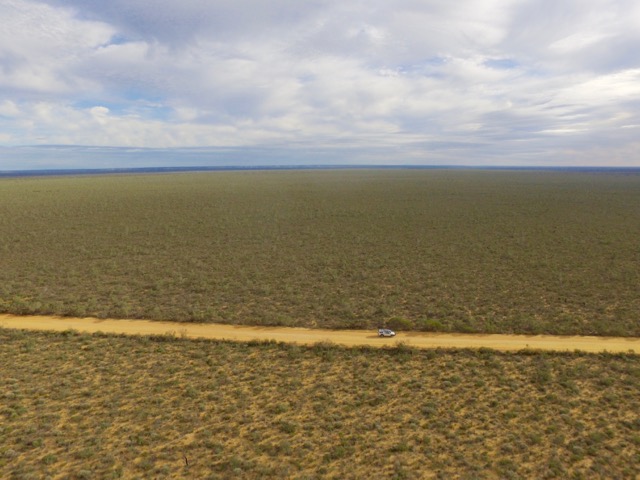 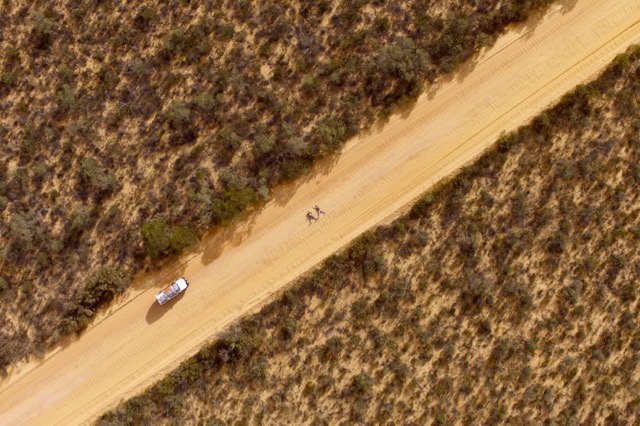 Two bozos and their car

We had a couple of walks planned, starting with a 2.6 kilometre return trip into Z-Bend Gorge. It was a steep trek down but not overly difficult and when we reached the end of the path we couldn’t help but press on a little further, just to see where the gorge would take us. 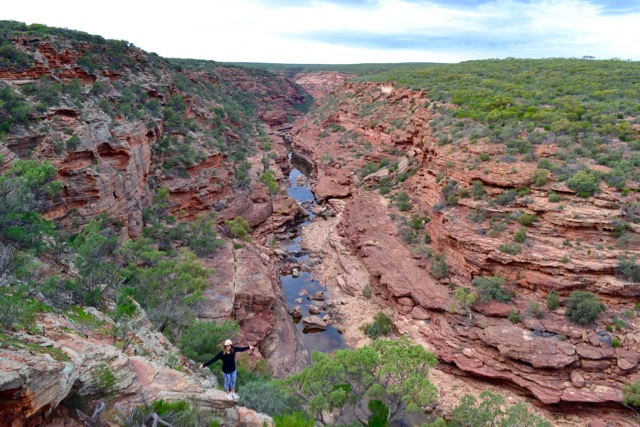 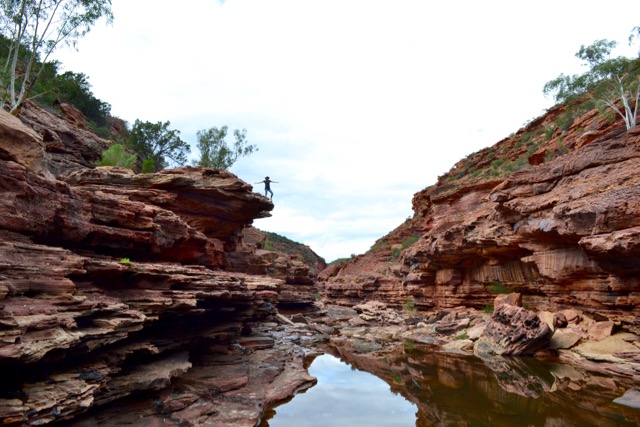 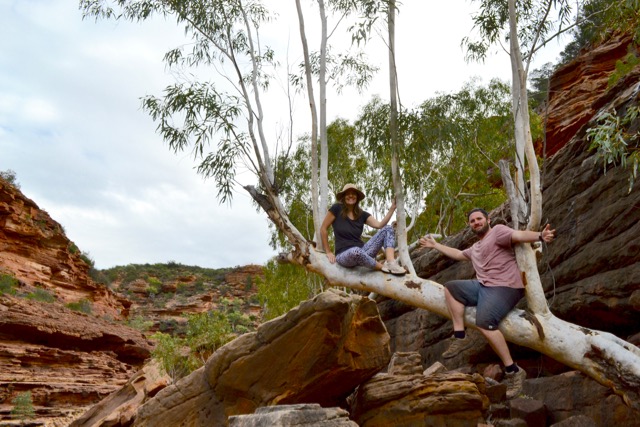 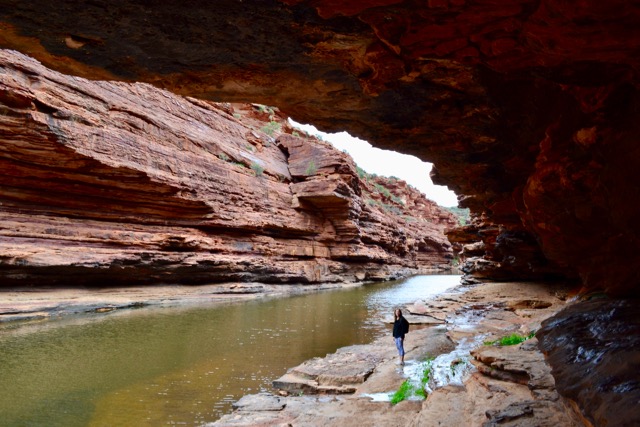 We were climbing along an upper ridge when a disembodied voice echoed around the walls, coming from nowhere and everywhere at once. We both just about fell into the water as we had thought we were completely alone. “G’day, how’re you going?” it asked. After a little while a man scrambled into view, which we were pretty relieved about since it meant the voice had come from a human person and not a gorge ghost.

The man turned out to be Ranger Mike (he didn’t introduce himself precisely this way, but we’re taking a little dramatic licence here), who was tracking black-flanked rock wallabies newly introduced to the area to boost up a recently discovered group of three: a pretty exciting find since it was thought that they had become locally extinct (you can read more about this here and here). He showed us the folding antenna he used to locate the animals via their radio collars and even switched it on, finding two wallabies nearby.

Ranger Mike also advised that if we pressed a little further on into the gorge we would find a place called ‘Placid Pool’, which was “probably the nicest place in the whole national park” (and not found in any tourist brochure). Well, with a recommendation like that we couldn’t help but continue and as the photos show, this turned out to be a good decision. 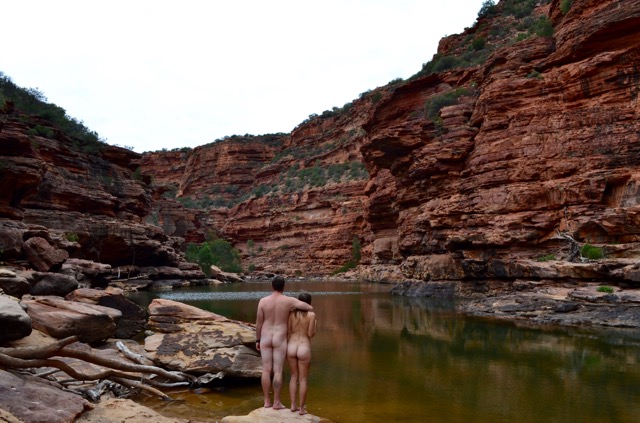 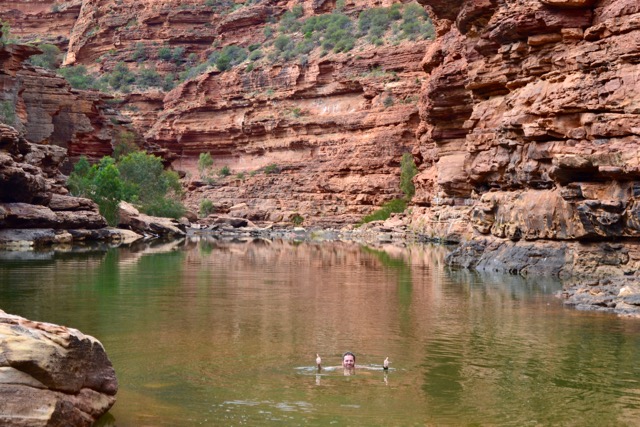 Feeling alive in the cold water

Time management has never been our strong point and we spent so long exploring Z-Bend that we ran out of time to complete our other intended walks. We could hardly feel disappointed about this though, given the amazing experience we’d had.

However, we did make sure to stop in and see the iconic Nature’s Window. It was here we ate a fiasco of a lunch at afternoon tea time where not only did we manage to lose the pasta for our spaghetti (we eventually found it, on the roof of our car, after Jono had already eaten most of his sauce), but the wind also blew our one and only cold beer off the table, irretrievably spilling its glorious sunshine fizz. 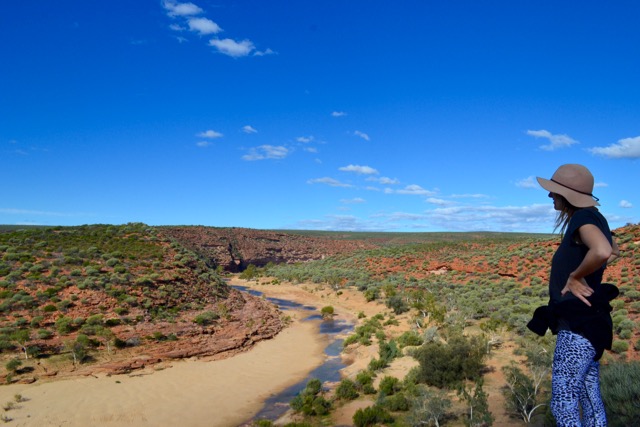 Checking out the Loop trek 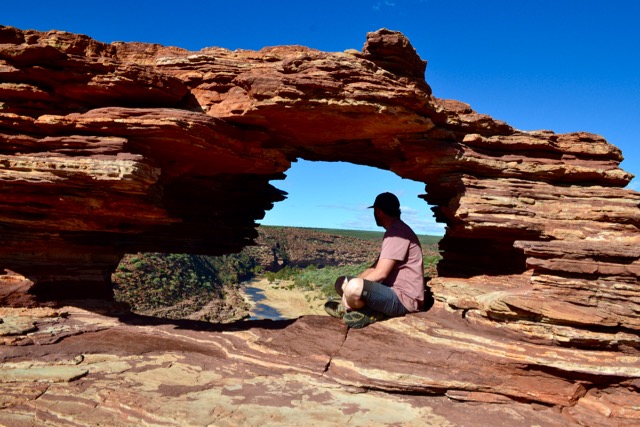 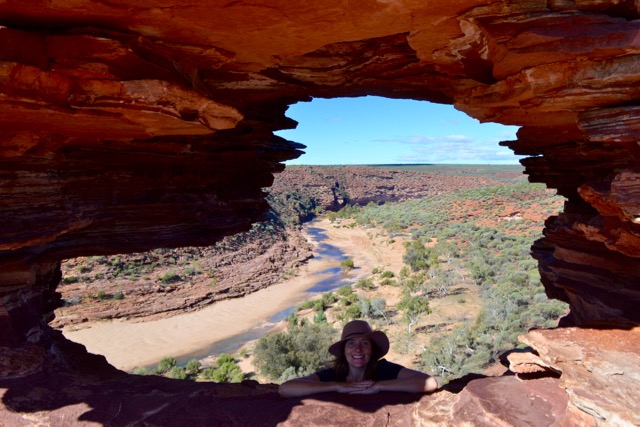 On returning home that afternoon we made sure to take Neddy for a big run and a swim, making the most of our third and final night in Kalbarri. Jono was disappointed that a lack of swell meant he had missed his chance to surf the world-class Jake’s Point break. However, in light of our recent delays and given we have flights booked to the UK – from Sydney – in mid-August (looking forward to attending the Jirsty nuptials!), we decided to push on. Shark Bay up next (you can read that post here). 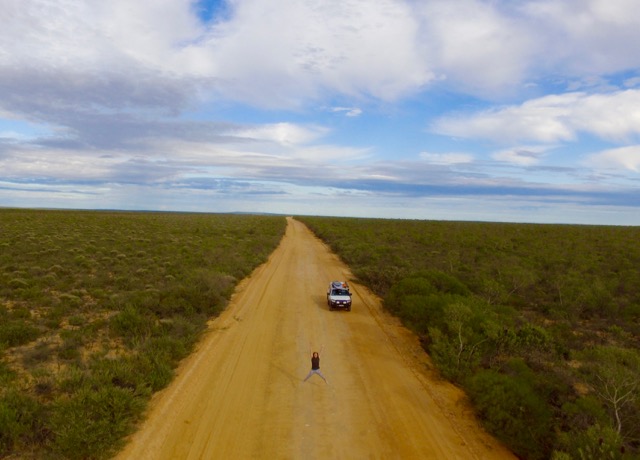 Thanks for having us, Kalbarri