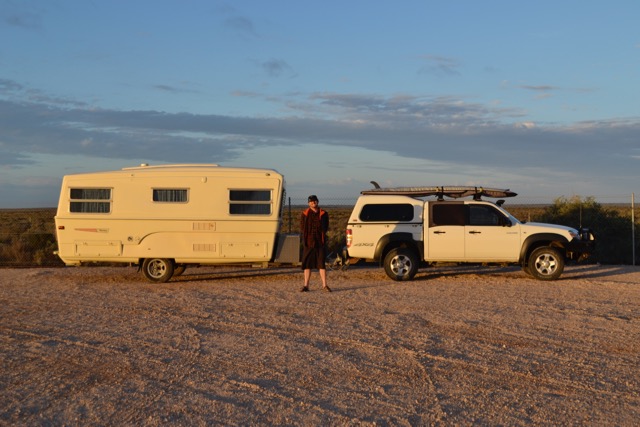 On leaving the desert we backtracked to the nearest decent-sized town, checked into Ceduna Foreshore Caravan Park, collapsed in two heaps and slept for about fifty hours. Then, upon re-entering the land of the conscious, we fully indulged in the luxurious comforts of caravan park life (Showers! Electricity! Toilets!).

In the interests of allowing our desert-addled brains sufficient time to recuperate, the next couple of days were also pretty low key, mostly involving gentle strolls (us) and frenzied runs (Neddy) along the Ceduna foreshore. And lots of food. On our fourth and final night in town we purchased a dozen locally caught oysters for the bargain price of $7, sat on the grass near the jetty and ate them as we watched the sun go down. The colours were spectacular. 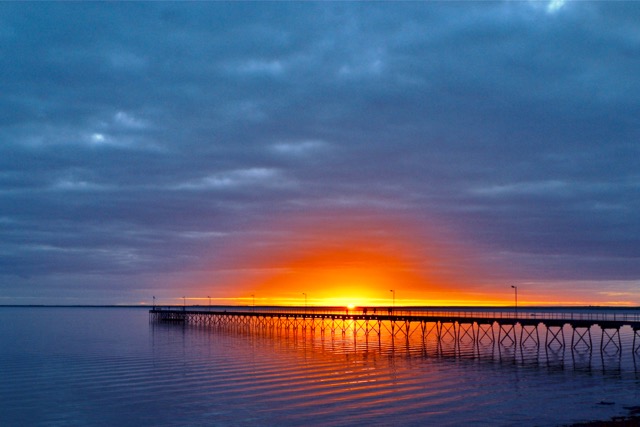 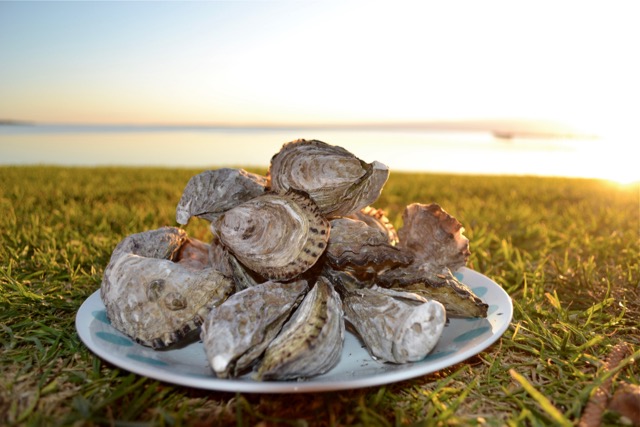 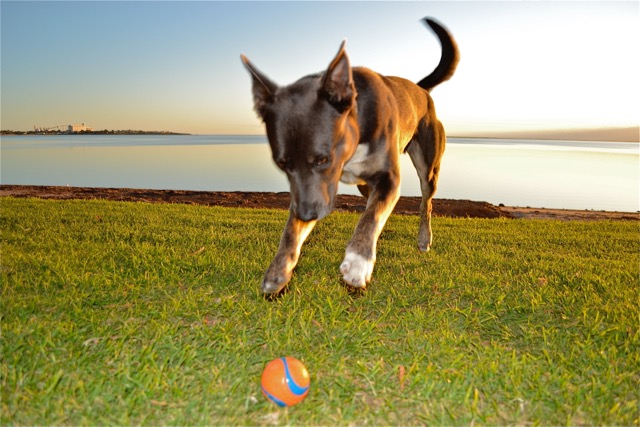 Ned and his favourite thing in the world

Then we set course for Fowler’s Bay. Situated precisely between nothing and nowhere, what a strange little place this was! After getting ourselves settled in the tiny, red dirt caravan park, we took Neddy for an evening walk, throwing his ball down supposedly inhabited streets without any fear that a car might want to use them. Most houses had yards filled to the brim with what looked like junk but which we imagined were necessary survival items when you live in the middle of nowhere, unconnected to a power grid. 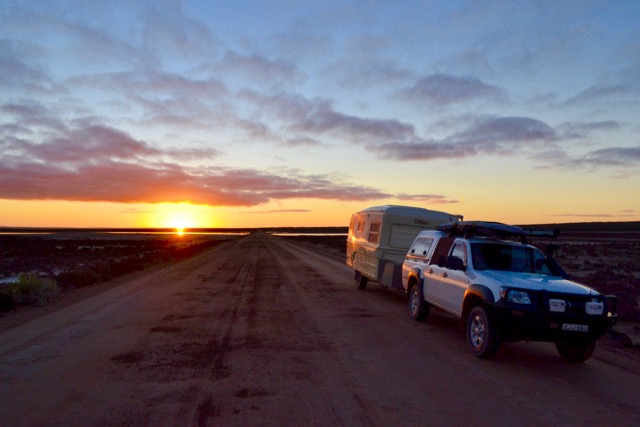 Heading into Fowlers Bay on sunset

The area surrounding Fowler’s Bay is good for 4WDing, fishing and seal spotting, and we also spent some time following tracks through the salt marshes. We did try to stick to existing paths but it was difficult seeing as how there didn’t really seem to be many. We pretty much just blundered our way through and have since learned that we were fortunate to do so without getting bogged.

From Fowler’s we steeled ourselves for the Nullarbor Crossing (capital ‘N’, Capital ‘C’). To be honest, we were both kind of nervous about it, imagining long stretches of dusty, corrugated road and no other travellers in sight. Instead, we found ourselves cruising along a well maintained bitumen highway, vehicles of all descriptions zooming past at regular intervals, giving the obligatory one-fingered wave as they went.

Nearing the end of the first day we stopped in at the Head of Bight. We’d heard amazing things about this whale watching mecca from a number of people, which perhaps lead to us having unreasonably high expectations. In our imaginings we would park our car by the side of the road and mosey on over to a low key viewing area to give some whales a good eyeballing.

Instead, Head of Bight is a privatised, highly regulated operation costing a $15 entry fee per person, per day, whether you’re there for five minutes or five hours and whether you see five whales or fifty. As we’d arrived only thirty minutes from closing time (we had no idea there would be a closing time!) we had to decide whether it was worth forking out the $1 per minute it would cost us to be there, and at the risk of not seeing any whales.

Since we had no idea if or when we would ever be back here again we decided to go it. After all, we consoled ourselves as we parted with our $30, surely some of this money would be going towards whale research or marine conservation programs. However, when asked about this, the staff person gave a very vague answer, mumbling words such as “expensive site costs” and “maintenance”. So maybe not, then!

We rushed out to the platforms and spent a deflating 5-10 minutes looking at nothing but water. Never before have we been so disappointed by the sight of the ocean. Then, out towards the horizon we saw a whale surface for breath, making a little splash as it went. Then another swam by, and another, and another …

In all we saw about twenty whales at the Head of Bight, including one humpback that breached about five times, projecting itself fully out of the water. It was pretty special. So, although the rigmarole put a dampener on the experience, we guess it boils down to doing your research. Had we looked into it even a little bit we would have known what to expect. A valuable lesson. 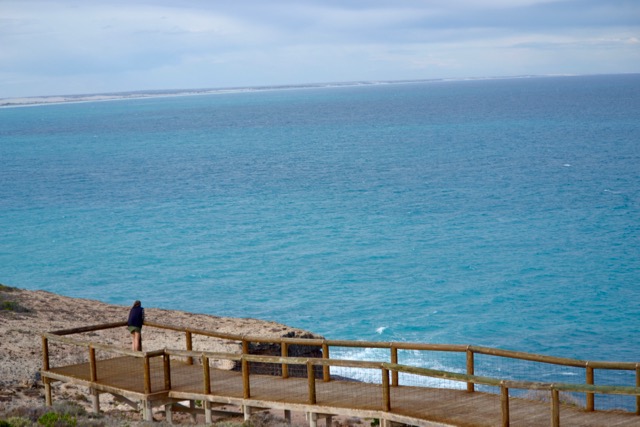 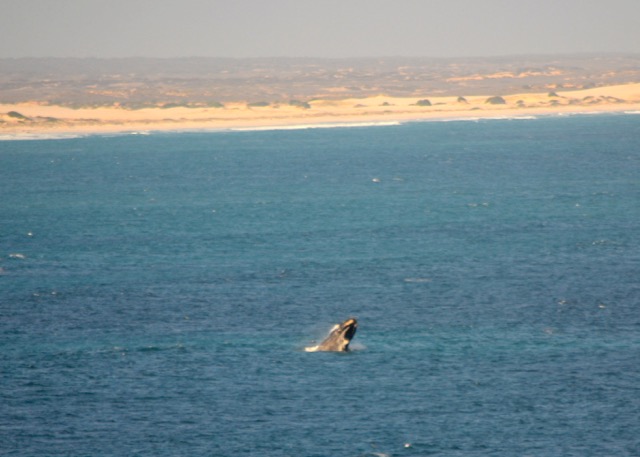 YESSSSS!!! A whale shows itself 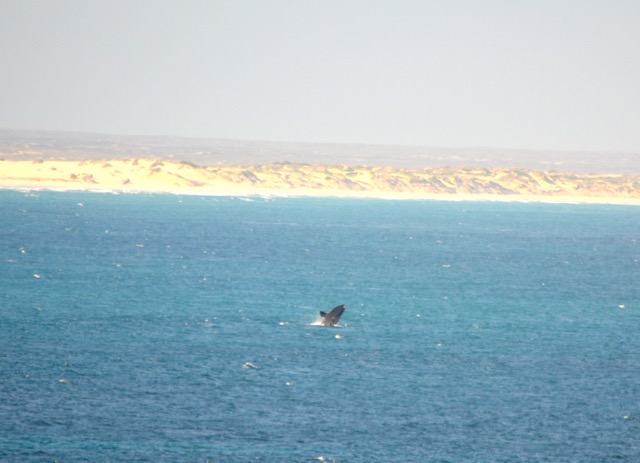 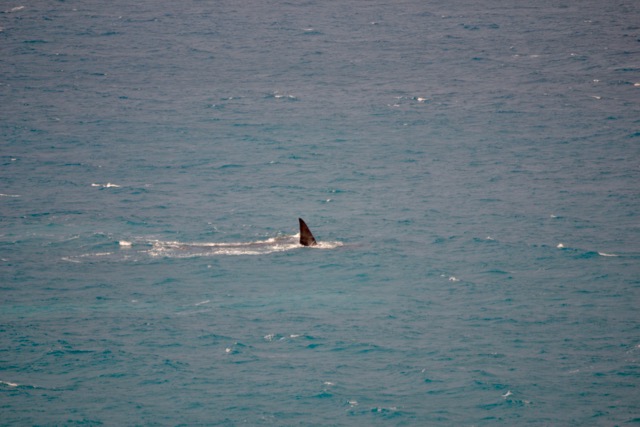 We hope thats a whale

After all that we ended up staying the night at a rest stop nearby. A gravel yard without views, it wasn’t the most spectacular campsite we’ve seen, but we did enjoy throwing the ball to Neddy as the sun went down over the plains. 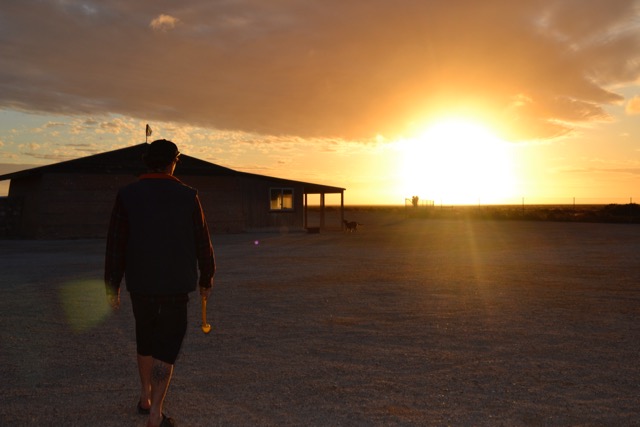 The gravel pit just outside of Head of Bight

Our second NC day was fairly uneventful apart from a near run-in with a large herd of kangaroos. Despite Laura’s indefatigable lookout for any roadside movement, they appeared out of nowhere, bounding across the highway in front of the car leading us and between our two vehicles. Somehow – we’ll never know how! – no one got hit. Laura just about had a heart attack though.

That night was spent at an unnamed rest stop on the eastern side of WA border, which was memorable for a number of reasons. The first was the spectacular cliff top views, stretching right out over the ocean. It blew our brains to think that there was nothing between us and Antarctica except a few bazillion litres of water.

Secondly, Laura saw a dingo, her first ever viewing of one of these creatures in the wild. Jono and Neddy had gone outside and when Laura opened the caravan door a couple of minutes later to find them, Mr/Miss Dingo was just metres away. Although we’re kind of glad Neddy didn’t notice the visitor, who would have only been about ten metres from him (separated by the caravan), the event certainly won’t be listed as a highlight on his guard dog resume.

The third memorable thing about that camp site was the WIND. Never before have we experienced such a gale. Quite honestly, we both worried (Laura out loud and Jono in silence) that the van was going to lift up and blow over. It didn’t, although eerie wind chime-y tunes whistled non-stop up our sink drainage pipe, keeping us awake for most of the night. 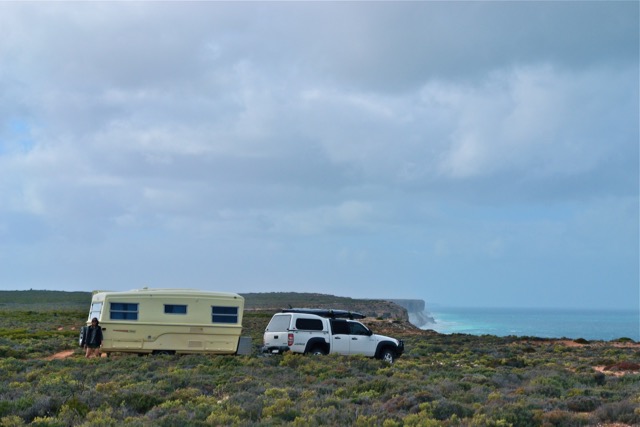 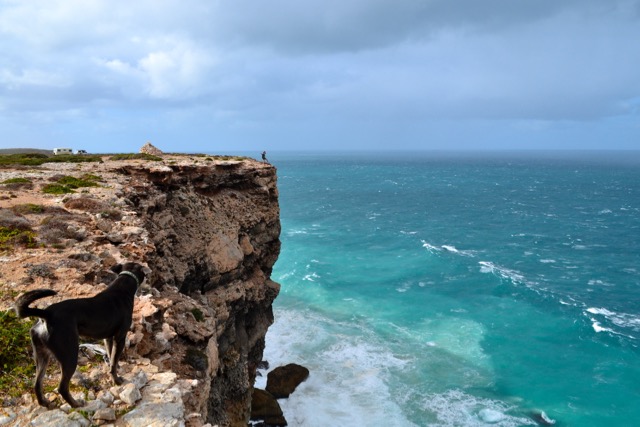 Laura and Neddy checking out the dangers of our campsite 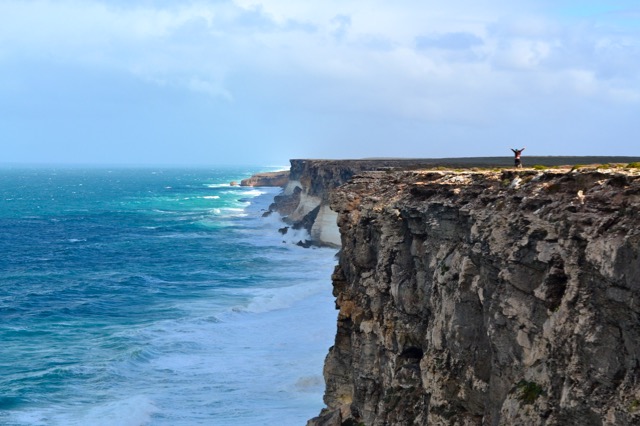 Jono standing at the end of the world 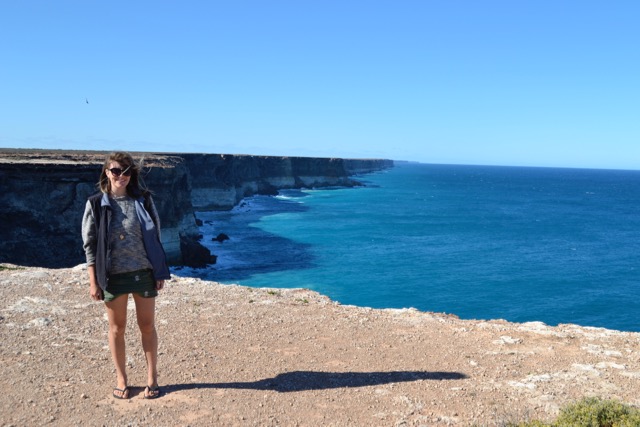 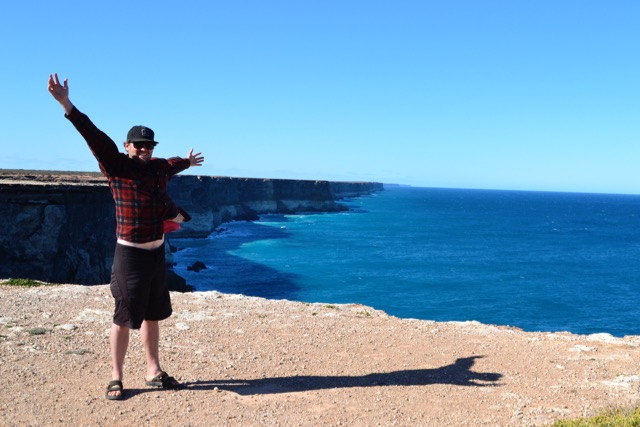 A whole lot of coastline 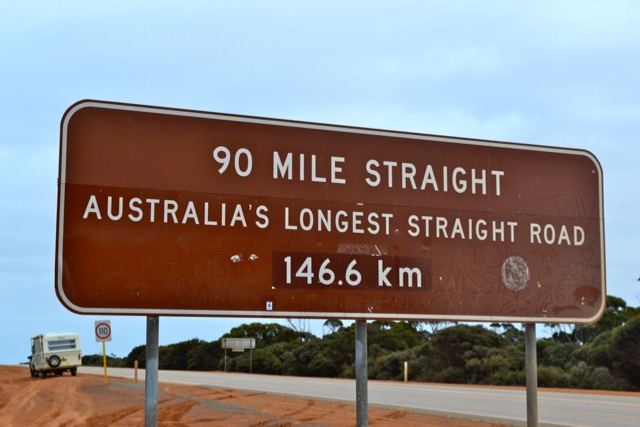 After this 146.6km straight there was a slight bend in the road and another 100 or so kms of straightness 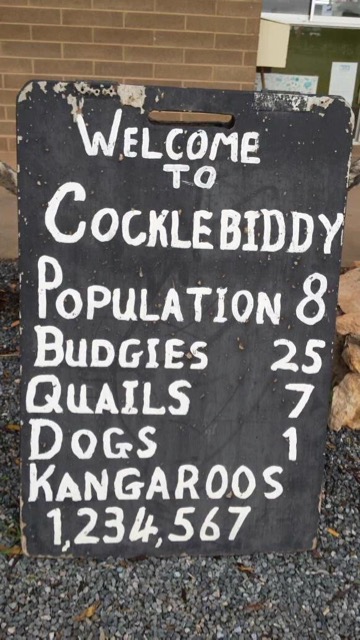 While refuelling at a roadhouse, we came across this sign. The Nullarbor is a weird and wonderful place

We hit the WA border on our third day. We’d been smart enough to stash our beehive safely out of sight and since the officer didn’t think to check the roof of our caravan where our vegie patch was flourishing*, we had what we assume was a fairly run-of-the-mill experience.

*We shouldn’t joke: border security is a very serious matter.

Our final night on the Nullarbor was spent at a cute little tree-lined rabbit warren of a roadside stop. There was no one else about and we dared to toast ourselves for a mission (almost) successfully accomplished.

It felt anticlimactic to arrive at Salmon Gums Caravan Park the next afternoon, knowing that we were now in WA and that the Nullarbor was behind us. What had seemed like such a huge and significant undertaking had gone by in a flash. Happily, we had Esperance to look forward to and we felt pretty good about that.